Ruth Bader Ginsburg is a trailblazer. A fighter. And a public servant who has dedicated her life to the pursuit of equality.
When Ruth was a young girl, her mother encouraged her to read, be independent, and stand up for what she thought was right. Ruth graduated first in her class at Cornell University and tied for top of her graduating class at Columbia Law School. But she faced prejudice as both a woman and a Jew, making it difficult to get a job. Ruth eventually found work as a law clerk, and her determination, diligence, and skill led to a distinguished career as a lawyer. In 1993, she became the second woman ever appointed to the United States Supreme Court. As a Supreme Court justice, Ruth has inspired fierce admiration and faced fervent opposition for her judgments in high-profile cases, many of which have involved discrimination. She has been lauded for her sharp wit and boldness, even when her opinions differ from that of the majority. 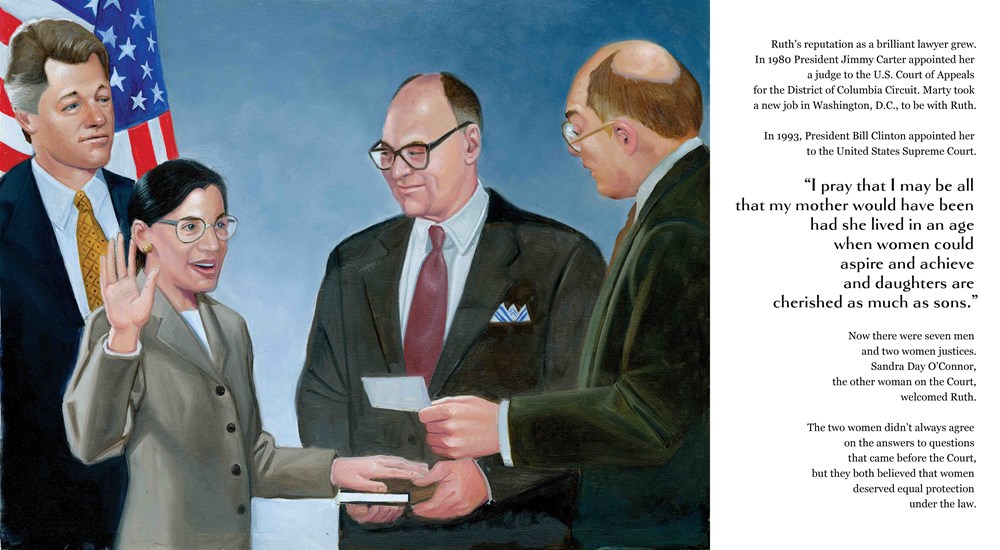 As a student, teacher, lawyer, and judge, Ruth often experienced unfair treatment. But she persisted, becoming a cultural icon, championing equality in pay and opportunity. Her brilliant mind, compelling arguments, and staunch commitment to truth and justice have convinced many to stand with her, and her fight continues to this day.
This installment of the award-winning Big Words series brings a legendary figure into focus with Doreen Rappaport's incisive prose combined with Ruth's own words. Eric Velasquez's dynamic illustrations infuse every scene with life in a moving tribute that will inspire young justice-seekers everywhere. Ages 4-8